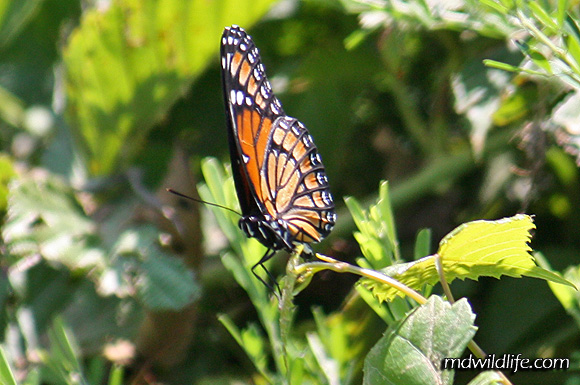 Viceroy (Limenitis archippus) is a butterfly that makes a living looking exactly like the Monarch.

It is slightly smaller, but has an almost exact color and wing pattern. The glaring top wing difference – an additional horizontal black vein – is very obvious, but usually not detectable until you get back home and look at your photos.

The pattern of white around the edge of the wing is also very different on both the top and underside. The Monarch has a double row of small white circles, while the Viceroy’s pattern features larger white crescents.

I took the above photo at Eastern Neck Island Refuge, but I expect the Viceroy is popular throughout the state. Range maps show it throughout the continental U.S.