View across the water at Canal Wildlife Management Area

Canal has a primary parking area located on route 286. The route is accessible from the first turn off on the southern side of the Chesapeake city Bridge. You must drive through the town to get to the area.

Canal is a hunting site during the winter months.

The WMA has a large body of water at its center with a walking trail running along the edge of the water in an arch a few miles long. The trail mostly consists of mud or clay and tracks of since passed animals are clearly visible. 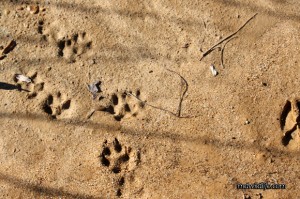 Animal tracks along the trail at Canal WMA.

The landscape features both wooded and marsh area, which makes the site a ideal location for butterfly and songbird life. Deer are also abundant at the site, as are some larger birds, ducks, turtles and small mammals or rhodents that prefer wet and marshy areas.

The walking trail, which runs parallel to route 286, is consistently level. About a half mile in the trail fades a little further form the road, but if the trees are bare, the road will never disappear from view. The path staggers into two tiers about one mile in, and remains split but parallel throughout.

The trail runs right along the water’s edge, and there are numerous cutouts and small standing areas ideal for fishing.

I need to go back in the summer months for a significant species survey, as my only extended trips have been in the fall months. I have seen butterfly, dragonfly, small birds, larger hawk species, turkey vultures, mallards; and tracks from deer, frogs and what I assumed was muskrat.

In the fall, the colors are spectacular, however, as the treeline that surrounds the pond trades columns of red, orange and yellow.

The WMA is triangular-shaped and the walk from the parking area to the opposite edge is three miles one way.

It’s not a massive, teeming wildlife area, and I don’t know if I would drive across the state to get there, but if you’re in or close to Cecil County, it’s a great spot to hit. And you can grab some good food and drink in Chesapeake City as well.

My Tracks for Canal WMA