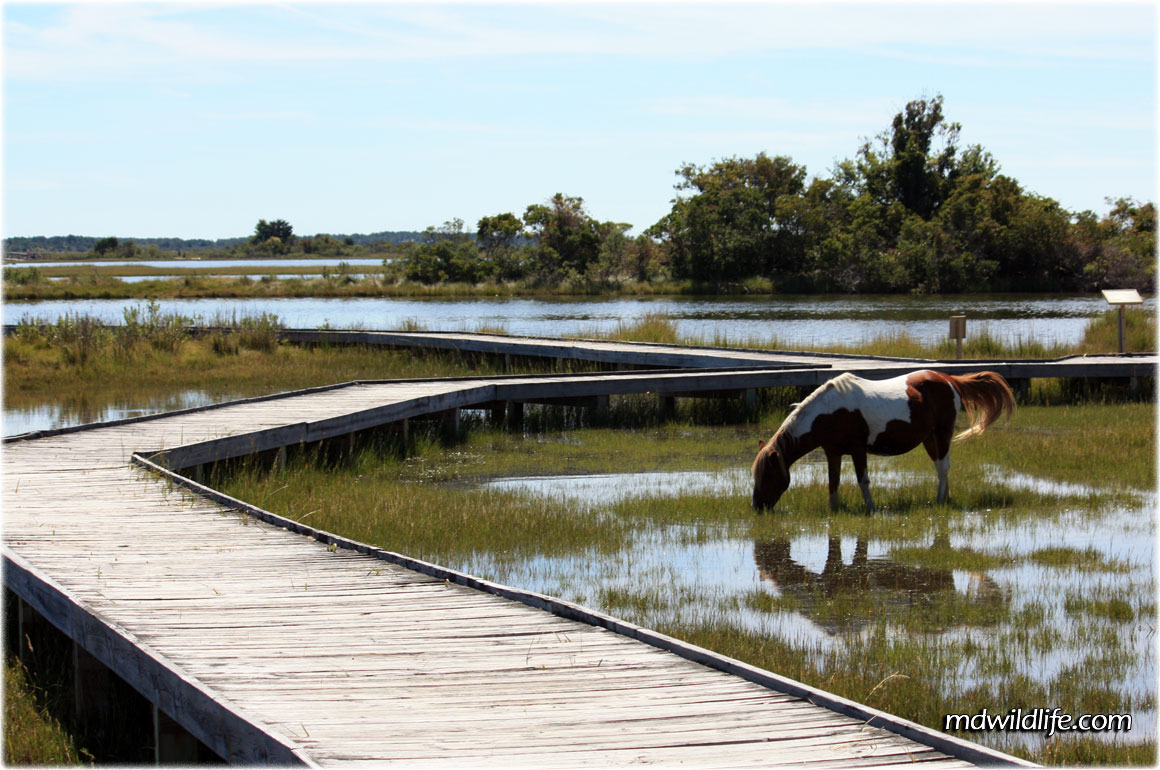 A horse wades along the marsh in this typical Assateague Island scene.

Assateague Island State Park and National Seashore is a gorgeous strip of land running across the southern tip of Maryland from Delaware to Virginia.

It is accessible from Maryland state route 611, which can be grabbed from Route 50 in Ocean City or from Route 376 by way of 113 in Berlin.

Route 113 runs parrallel to the Island across the southern portion of Maryland and connects to State Route 12 on your way to Chincoteague Wildlife Refuge. Chincoteague is located in Virgina, but its worth mentioning because a pass purchased at Assateague is good for admission at Chincoteague as well. So make a day of it.

Assateague is a great location for camping, biking, a little hiking, a leisurely drive or doing the beach thing and lot of other stuff, but we’re focused on wildlife here.

A permit restricted path runs along the Island’s seashore to give select visitors a little more than standard access to the park, but the area is restricted to off-road vehicles, one of which I do not have, so unfortunately you get no perspective from me. 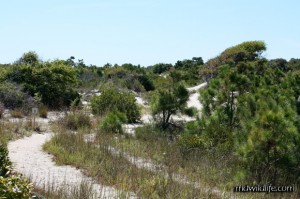 The Life of the Dunes trail is certainly not your typical wildlife trail walk.

The paths and trails I did have access to, are nice. There are three standard trails to walk at the park – the Life of the Dunes, Life of the Forest and Life of the Marsh. The trails each include a parking area, are clearly marked and well laid out. Each trail is under a mile and looped – which I love – (there is something not as cool about walking a path and then turning around and walking back on the same trail).

The websites all warn about bugs, and they’re not kidding. If you don’t spray, you will get eaten alive, especially in the summer months, so take the necessary precautions.

The Life of the Dunes is a unique environment as far as WMA and Refuge trails go. It was nice to walk through, and kind of a different feeling trapsing through sand and the asphalt remains of Old Baltimore Blvd.

The Life of the Forest has a great lookout point toward Chincoteague Bay, but the Marsh was probably my favorite. The boarded walkway leads you through a marshland where frogs are jumping, fish are darting and horses just might be wading. There’s a good chance at birds overhead and then a shoreline opening that opens up a couple hundred yards wide. Great opportunity for some waterfowl viewing, but you still have wooded marshland to your back.

Of course, what everyone thinks of when they think of Assateague is the wild horses.

Now, when I thought of “wild” horses, I was thinking savage horned clydesdales, snorting fire and kicking in the head any little kid that came near … or at least some Black Stallion-like scene of horses bounding up and down a sandy beach and tossing off would-be riders.

But it turned out to be just a bunch of grass eaters, chillin’ on the side of the road. I even saw folks letting their little kids walk right up and pet them, or they would pull their cars up to like two feet away from a horse, both of which are moves I would not advise. 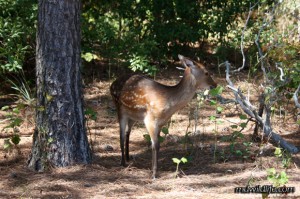 This deer pokes around a set of bushes looking for some grub.

So the horses are easy to see. They are everywhere.

If viewing other species of wildlife – some of the smaller and more non-descript animals – is your goal, I would suggest getting to Assateague early in the morning to hit some of the trails before the families show up.  A bunch of little kids stomping down trails screaming “mommy! mommy!” will scare off anything with at least two of its five senses functioning at half capacity.

True story: I was lucky enough to run across this Sika deer (photo to the left) on the forest trail; it was poking around a set of bushes looking for food – at least it was, until a little kid decided to run up and throw a handful of leaves in the deer’s direction.

I don’t want to sound like a crank, I have nothing against kids, but if you go by the park on a Saturday afternoon, expect class trip clientele.