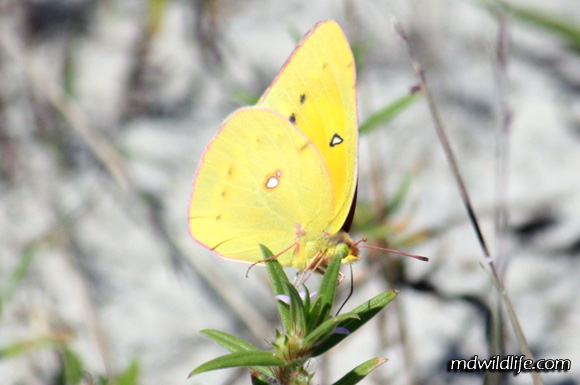 The Clouded Sulphur (Colias philodice) is a small yellow butterfly that is extremely common in the state. 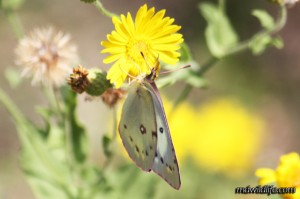 Head on shot of a Clouded Sulphur at Idylwild WMA.

The species, in general, can be found from Alaska down to Florida and all states in between. The photo above shows a sulphur among the sand dunes at Assateague Island Park, while the photo to the right was taken in an open field among the woods of Idylwild Wildlife Management Area, which displays the great range in habitat the Clouded Sulphur can occupy.

It flies from the spring to the fall, so there are plenty of months available to snag one.

The flight pattern is rapid and erratic. The sulphur moves around pretty quickly and will hop from flower to new flower or perch to a new perch that may be just inches away. Its movements are rapid and usually in succession, so it can be hard to photo, unless the sulphur decides to take its time at a particular flower or leaf.

Identifying on the move can be difficult because of its size, its rapid movement and its similarity in appearance to other butterflies in the sulphur family.

You almost never catch the Clouded Sulphur with its wings open in a state of rest, so you have to rely on underside markings, which can be very close to the Orange Sulphur, the Pink-Edged Sulphur and the Southern Dogface. The latter two are not very common in Maryland, but the Clouded should stand out with three distinct dots on its hind wing and two white wing eyes, with the second, top eye, significantly smaller.