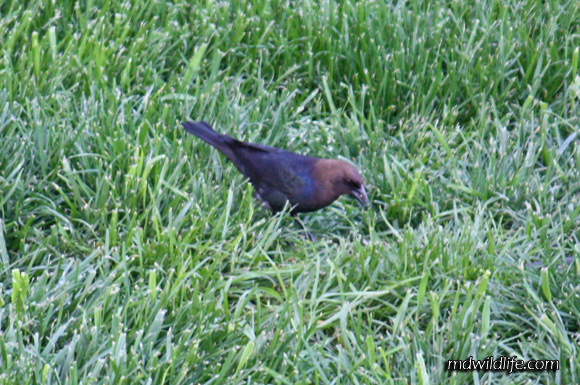 The brown-headed cowbird feeds with tail up, making this shot a dead giveaway.

The Brown-headed Cowbird (Molothrus ater) is a fairly common backyard bird with a few distinguishing characteristics that make it east to pick out.

Females are mostly gray and white and the juveniles look very similar to a Savannah Sparrow, but the males, such as the picture above have very shiny blue/green bodies with a bold brown head.

The brown-headed cowbird likes to mingle with blackbirds, and I did see a few red-winged blackbirds the same day I photographed this guy. Another piece about the bird I picked up doing research is that it commonly feeds with its tail pointed up.

The Cowbird’s region spreads across North America and you may find them in suburban areas as well as woodlands.