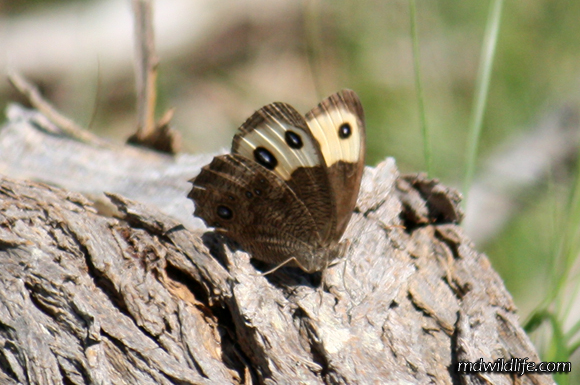 Common Wood Nymph clings to a log at Assateague Island.

The Common Wood Nymph (Cercyonis pegala) is a summer butterfly that is very easy to identify.

As its name would suggest, the Wood Nymph hangs out around wood; often positioning itself along logs or grasping to tree bark. It will also flutter around within a bush or tree, positioning itself among a cluster of branches, making it very difficult to get a straight and full line of sight.

The Wood Nymph keeps its wings in a closed position when at rest, but will often flap or open them only to quickly close again, which means, if you’re looking for an open wing shot on one of these bad boys, you need patience and a quick trigger finger. If your camera has a sport mode, you can fire that up and just go continuous shot, hoping you catch the Nymph mid-spread.

I have seen these bad boys in middle to late summer, as far west as West Virginia’s Blackwater Falls and to the southern part of the state of Maryland at Assateague and Deal Island.

The top part of a Wood Nymph’s wings have a pair of small, dark black spots, but the wing undersides carry huge blue eyes. There is also a very prominent brushstroke of cream or yellow visible, whether the wings are open or closed. This brushstroke appears at the edge of the front wings. The stroke of color really displays a great pattern in flight.