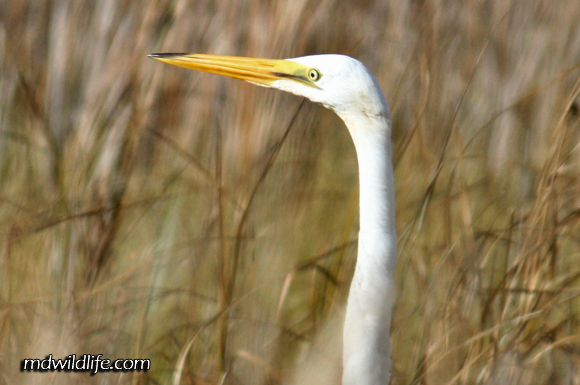 This closeup of the Great Egret's head displays the identifiable green skin around the eye.

The Great Egret (Ardea alba) is a tall, white, wading bird very common in the state of Maryland.

On the scale of commonality, I would have to rank this one right up there with the Great Blue Heron. It’s like, the default bird, if you have any kind of water going on.

I have seen the Great Egret at all the popular spots: Deal Island, Eastern Neck Island, Millington; even on the side of the highway, which means its by no means reclusive. 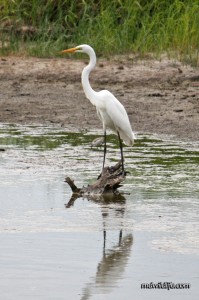 A Great Egret stands on a log in shallow water at Blackwater Refuge.

Like the blue heron, however, it will startle quick and take off on you.

The Great Egret is easily distinguished from other egrets by its large size, and its combination of yellow bill and black legs. The green skin that surrounds the Great Egrets eye, is also a feature not found in other species of the egret family.

Despite its size, the Great Egret can be found perching in the branches of trees, and is not always a wader. I have also observed egrets will stand together in groups of a half dozen or less, while the herons are generally more solitary in their behavior.

Deal Island WMA was the most impressive collectin of all the areas I have spotted Great Egrets. They were scattered throughout the marshes on either side of the main road. Some stood in groups, others alone, and they took to flight in succession as my car rolled along the gravel road.

Blackwater’s wildlife drive is no slouch either, if you’re interested in egrets. Blackwater’s environment also provides more opportunities for the Great Egrets to perch as trees and bushes line the most areas of the wildlife drive, close to the water.