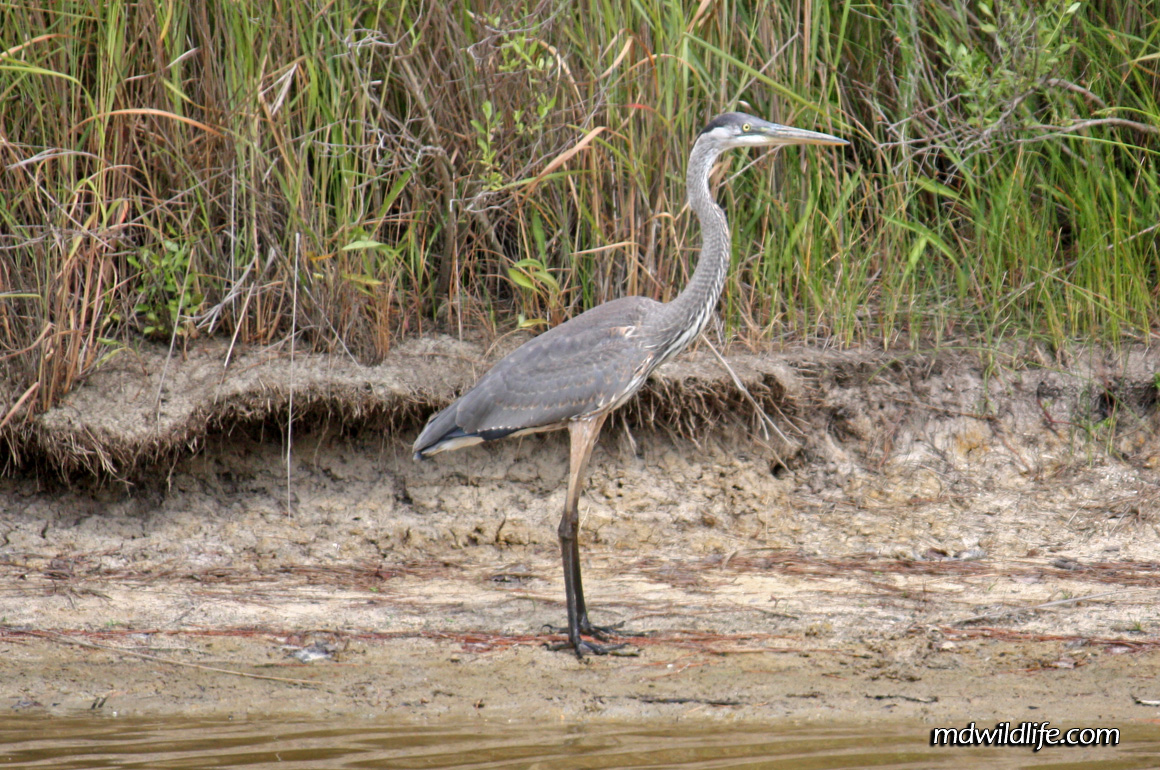 Side view of a Great Blue Heron at Blackwater Refuge.

The Great Blue Heron (Ardea herodias) is a tall wading bird extremely common in the state of Maryland. 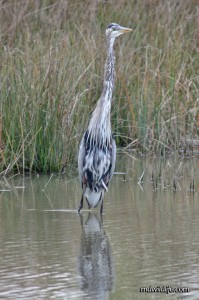 Great Blue Heron can be found anywhere, across the state. While coastlines of large bodies of water are an obvious choice, you could be just as like to find a heron pulling up in a pond of ditch on the side of the road that has filled with water. The Great Blue Heron may also seek refuge in wooded areas, as long as there is some water to hang out by for fishing.

I have found it to be a timid bird in almost all cases. Any noise may startle it away. Even your presence – if you walk up close enough to be discovered – while usually cause the heron to take off.

Don’t worry if you scare one off, however, if you levae your house enough, you’ll have plenty of opportunities to photograph a Great Blue Heron in Maryland.

I swear I have spotted and taken photos of Great Blue Herons at several areas, eventhough, only photos from Blackwater Refuge appear on this page. I guess Blackwater just gives you the best Blue Heron opportunities on its wildlife drive.

The wildlife drive at Blackwater is an amazing spot for Blue Herons and Great Egret. It would not be unusal to see a half a dozen of each species during a single trip, and the open basin provide unobstructed views of these magnificent birds in their natural habitat.

Based purely on its size, shape, stance and color it’s extremely easy to recognize a Great Blue Heron and really difficult to mistake it for something else. The only other heron I’ve spotted in Maryland is the Green Heron, and it is so much smaller (at least half the size) and has different coloring in its body and head areas. 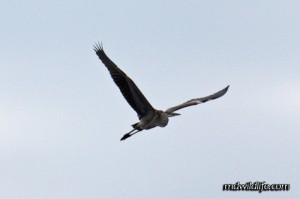 According to some books I’ve read and websites I have been on, the Small Blue Heron and Tricolored Heron may also call Maryland home, but I have yet to see one of eitehr of those species.

It may flap its wings often, depending on the haste of its flight, but with its wings spread, you get a great perspective of the size of this bird, which usually rests with wings folded and its neck tucked.

Even in flight, the heron will bring its head back toward its shoulders by compressing the curve of its neck. The legs stick out straight back and the wings reach out long when extended. In flight is also where you can get the best look at a particular heron’s colors. With the chest and neck exposed, feathers of black, white, orange and blue may all be exposed, granting an amazing picture.